Creator/Executive Producer
Mara Brock Akil (born Mara Dionne Brock) is an American writer and producer. She is best known for Moesha, Girlfriends, and Being Mary Jane.

Mara was born in Los Angeles, California to Joan Demeter, and was raised primarily in Kansas City. Her younger sister is Kara Brock who is also an actress. She graduated from Raytown South High School in 1988. She is a graduate of Northwestern University, where she earned a bachelor's degree in journalism and became a member of the Delta Sigma Theta sorority. After she graduated from Northwestern in 1992, Brock Akil decided to put her career plans in journalism on hold to work as a manager at the Howard Street Gap in Chicago and look for opportunities to work within Chicago's entertainment industry.

She first began writing for television in 1994 writing for the critically acclaimed but short-lived Fox series South Central. In 1999 she served as supervising producer and writer on The Jamie Foxx Show after writing for Moesha for four seasons. In 2000 Brock Akil created and executive produced (along with Kelsey Grammer) another UPN series, Girlfriends. She also created and executive produced Girlfriends′ spin-off series, The Game. In 2009 Brock Akil became a consulting producer and writer for the ABC suburban sitcom Cougar Town. She is the creator of BET's Being Mary Jane, which premiered in 2013.

She currently resides in Los Angeles, California with her husband and two sons. 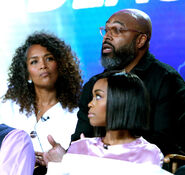 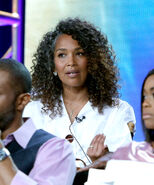