LaWanda: The Book of Burial

And Then the Devil Brought the Plague: The Book of Green Light

BACK IN TOWN – Black Lightning is recruited to rally against The 100 gang. Anissa investigates the new drug hitting the streets. Meanwhile, familiar faces begin to reappear.[3]

At Garfield, Jefferson is alerted about a commotion in the boys bathroom. In the bathroom, Jefferson witnesses Bernard Lewis acting irrationally. Jefferson uses his powers to knock Bernard unconscious and pulls out two pills from his pockets. Jefferson hides the bills in his suit jacket as security comes into the bathroom.

While driving, Anissa sees two of her students being sold drugs. Anissa tells them to get into the car and tells the two drug dealers to leave her students alone. When she walks back to her car, one of the dealers calls her a bitch. Anissa is about to confront them again until they show her their guns, but she leaves with a smile on her face.

Jefferson is at Gambi's informing on the incident with Bernard, and Gambi tells him that Bernard was high on the new drug, Green Light. Jefferson begins to talk about all the chaos the 100 has caused and says he feels like they're losing, but Gambi tells him that they can't save everyone. Jefferson says that he wants to harder and wants to find out who are the higher ups in the 100 gang. Gambi says he will get in touch with his contacts, while Jefferson decides to go out that night to ask the street level gang members.

The next day, Lady Eve is at her funeral parlor working as Tobias stand there and watch. She tells him the story of how Africans think that Albinos were magical and kills them to grind their bones into "magic dust". She begins to talk about how he obtained leadership of the 100 and that she admires his work. However, she tells him that her associates are not happy with him lately due to Black Lightning's return. Tobias rebuttals that he made them millions of dollars, and doesn't understand why he's being given a hard time over one mistake. Lady Eve tells him that it's not just a mistake but it's his reputation. She reminds him that his claim to have murdered Black Lightning is what gave him prominence in the gang community, but now her associates feel like they have been deceived by Tobias. Tobias says he will kill Black Lightning for good, but Lady Eve asks how can she trust him as he failed to do that nine years earlier. She brings up how they're making too much noise in the community due to the shooting of Reverend Holt and Khalil. Lady Eve tells him that he needs to get rid of Black Lightning, because if he can't fix things he would be turned into "Albino Dust". Tobias leaves as she goes back to working.

At Garfield, Jefferson and Ms. Fowdy are in the office with Bernard and his father. Mr. Lewis says that they received an email from the school board notifying them that Bernard will be suspended for his actions the previous day. He asks if Bernard could be given a second chance as Bernard has never been in trouble. Jefferson says that Bernard will not suspended, and he will go to college. Then, Jefferson asks Bernard who gave him drugs. After some hesitation, Bernard gives up the name of Ronald Wright. After they leave, Ms. Fowdy says the school board will not be happy about Bernard staying, but Jefferson says the decision is up to him. Jefferson claims that she seems to care more about the school board than the students, but she denies that. He tells her to inform the school that it is his decision to keep Bernard. Ms. Fowdy tells him that she is Vice Principal, not his secretary and to give the board the message himself and leaves. Jefferson calls Gambi and tells him that Bernard got the drugs from Ronald Wright. Gambi tells him that Ronald is dead as he overdosed on Green Light. He asks what information did Jefferson get from the dealer last night. Jefferson says he knows who 2-bits is and believes the situation will get a lot worse before it gets better.

At the hospital, Jennifer is with Khalil as he is doing physical therapy. After the nurses, Jennifer and Khalil overhear them talking about Khalil never walking again. Jennifer asks if he is okay and Khalil says he is as he's confident he will walk again. When she leaves his room, Jennifer breaks down crying in the hallway.

Later on, Jennifer returns home, but is called into the living room by her parents. They tell her that her track team coach called and revealed that Jennifer left practice early. Jennifer says that she was helping Khalil with his physical therapy. Jefferson explains that he knows she is going through tings and suggests she spends less time with Khalil and focus on herself and school. Jennifer says that Khalil's mom works hard, so she wanted to help him. Jefferson says she is their concern and she will apologize to her coach. Jennifer announces that she doesn't want to run track anymore as she only did it to mke her father happy. Lynn tells her to take a couple days and if she feels the same, she can quit the track team. Jennifer asks if she can leave and Lynn says yes.

At dinner, Anissa is discussing Black Lightning with Inspector Henderson, his wife, and her parents. She says Black Lightning is doing a good thing, but unfortunately people sometimes end up hurt. Henderson says that Black Lighting doesn't care about people getting hurt. However, Anissa says he has the same agenda as the police, but is doing a better job. Henderson calls Black Lightning a vigilante and recalls Khalil, Holt, and other being hurt because of him. Lynn tells Anissa to think about how hard things are for Black Lightning's family (referring to herself), but Anissa argues that his family should be supportive of him. Hearing Anissa's words Jefferson smirks while looking at Lynn. Anissa apologizes for the conversation and sys she has to leave. Before leaving, Jefferson asks if she was alright. Anissa says yes and Jefferson smiles in appreciation of her.

That night, Anissa is wearing hoodie and approaches the two drug dealers from before. They try to sell her drugs, but she uses her power to knock them out. She begins to worry when she notices that they're not moving or barely breathing. Anissa calls the police to come to the scene and leaves.

At a bar, Jefferson greets his old friend 2-bits. 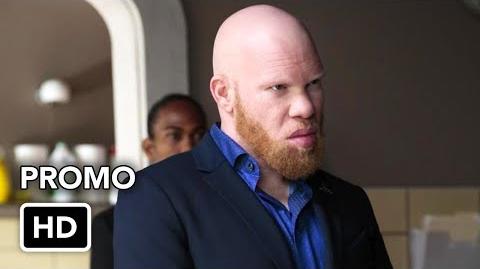 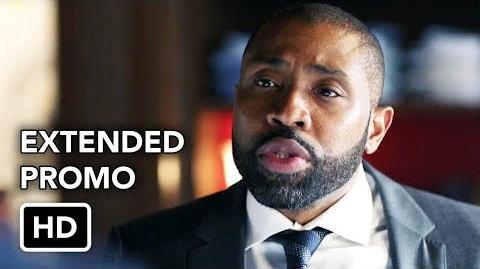 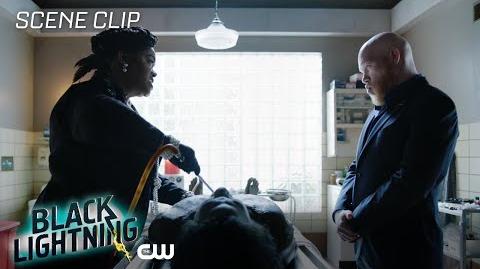 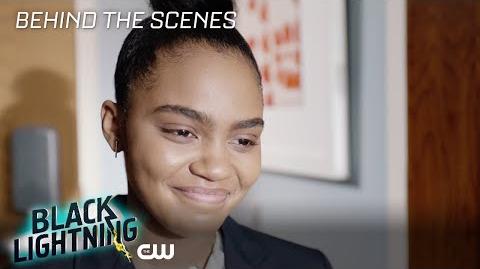